Silent Scars: My Hearts Journey Living With a Vietnam Veteran

Those adept and courageous fighters sometimes flew so low we could see their faces and make out the color of their hair, sometimes even their eyes. The last time I caught sight of American combat troops close up, on the ground, was late one morning in April , near An Khe Pass. I saw a platoon of airborne troops on patrol on Highway They seemed relaxed, not particularly cautious, walking down the road in single file, skirting the edge of their base.

To this day, I see them clearly in my mind, as if they were right in front of me. I especially remember a radio operator carrying a PRC backpack radio. He seemed nonchalant, with no bulletproof vest, no helmet, no M or grenade launcher, just the radio on his back. He had short brown hair, no beard or mustache. Through my binoculars I saw that he was chewing something, probably gum. 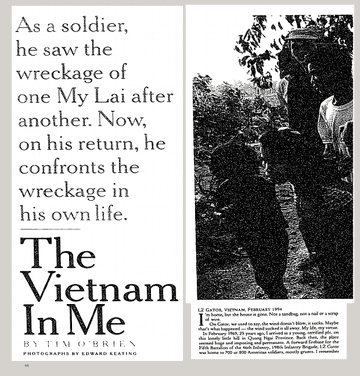 He was just ambling along, kicking an empty Coke can as he walked. Fifteen minutes later the sound of gunfire told me his platoon had walked into our ambush. I never found out what happened to that radio man, have no idea whether he made it. In , during my first trip to the United States, whenever I was visiting a university or high school and saw young boys and girls in auditoriums and hanging out on the lawns, I would see again the face of that young soldier, hear the clatter of that empty Coke can on the road.

He was just like a kid on the way home to his mother after school, playing with whatever he happened to come across. I still hear the hiss of hundreds of bombs being dropped from Bs, the roar of artillery barrages and the thrum of the helicopter rotors. I still see platoons of American Marines in bulletproof vests and helmets jumping out of Chinook helicopters, brandishing their Ms. In the spring of , when we were stationed west of Kon Tum, we were sprayed repeatedly with Agent Orange.

We understood all too well its horrible destructive force.

Silent Scars: My Heart's Journey Living With a Vietnam Veteran

As soon as the Caribous passed over us, the sky would turn dark with a strange, thick, milky rain. The jungle canopy broke apart, ulcerated and fell to the ground. Leaves, flowers, fruits, even twigs, all silently dropped. Green leaves turned black, crumpled. Grass withered and died. I witnessed many cruel scenes in the war, but that brutal massacre of nature is what comes back to me most often and disturbs my sleep.

The last time I saw Americans was in the final days of the war.


We had advanced deep into Saigon and made it almost all the way to Tan Son Nhut airport. But this time, they were covering the retreat of all remaining American military, civilian and diplomatic personnel from South Vietnam. The last American was evacuated from Saigon in the early morning of April 30, , and by noon the Saigon regime announced its surrender.

The brutal war that had seemed for so long as if it would never end was finally over. My unit stayed in Saigon for a few weeks, until mid-May , and then we were sent back to the Central Highlands, given the task of searching for the bodies of our comrades who had been killed, and collecting their remains. At the end of that year, after six years in the South, I went home. Of the three young men from my apartment building in Hanoi who enlisted with me, I was the only one to return. Now, 23 years after I made it back home, I was seeing Americans.

Literature really does have its own magic. In the same spirit, Prof. Although I did not speak English, I could still feel the spirit of the poems the Americans had written and were reading to us. When I met those writers, I tried my best to keep my astonishment to myself. What could the novelist Larry Heinemann have in common with a combat soldier in the 25th Tropic Lightning Division who fought in the bloody battles in Tay Ninh?

How could Bruce Weigl, the author of such romantic verse, be a soldier who had helped relieve the horrific siege of Khe Sanh? The conference also included veterans who came from all over Montana to witness the exchange of American and Vietnamese writers, and to see us, their former enemies. When he found out I was a veteran of the 10th N. Division, which he had fought, he greeted me as a long-lost friend. In Missoula, we were taken to the memorial to soldiers who had been killed in Vietnam. It was a week after Memorial Day, and lots of people were still visiting the site. At the foot of the large stone slab engraved with names of the fallen, people had left some flowers, a postcard, a class picture, an old notebook or diary, a military compass, a issue of Stars and Stripes , a flask with two tiny glass cups and a vintage Zippo lighter.

There was also a birthday cake with candles on top. The Missoula memorial was much smaller than the Wall in Washington, but the sorrow and compassion it evoked in visitors was no different. Most, I assumed, probably knew the men whose names were carved into the stone, but there were also visitors from other places.


I met a retired teacher and mistook her for the mother of a fallen soldier. My interpreter explained that she came from San Francisco, and had taught high school in Missoula for years. Whenever she returned, she would visit Tommy at the memorial. He was one of her students, had graduated in , and was immediately drafted. The next summer, his family received a death notice.

He was killed less than a year after graduation. Why was his life so short? At 18, he had finished high school, become a soldier and after six months of hard training, had boarded a plane with his friends, flown halfway around the world, landed somewhere in Vietnam, maybe Da Nang, put on a bulletproof vest and helmet, and taken a rifle to the battlefield. An inexperienced soldier, perhaps he was killed in the first few minutes of his first battle.

I wondered if that unfortunate student had been able to celebrate his 19th birthday, whether he had been in Vietnam long enough even to see the sun rise. Everywhere we went, from the conference to meetings with publishers, bookstores and readers, we were welcomed with open arms. See All Customer Reviews.

Shop Books. Add to Wishlist. USD Sign in to Purchase Instantly. Overview As a wife of a Vietnam veteran, I lived and fought through the dark side of a man's war memories. Silent Scars is a story about scars you cannot see. My scars of war are in my heart and his are in his mind. By telling my story, I want to help others avoid the wounds I live with every day. I hope and pray that I can make a difference in other people's lives through the lessons I have learned.

Product Details About the Author. About the Author Brenda Phillips Carter is a native of Knoxville, Tennessee where she has dedicated her life to serving others and raising her family. Average Review. Write a Review.

Related Searches. A Mate for Wade. Tawny Reid, an award-winning photojournalist, known world-wide for her expertise with creating editorials through images. On assignment in Alaska, she decides to document the Arctic Wolves.